Finsch is one of the world’s significant diamond mines and South Africa’s second largest diamond operation by production (after De Beers’ Venetia mine). The mine benefits from state-of-the-art mining infrastructure, including a modern processing plant which was upgraded shortly before Petra acquired it at a total cost of approximately US$100 million.

Finsch has produced large, special diamonds in its history and produces a number of +50 carat stones annually. In addition, the mine is known for highly commercial goods of +5 carats and is rich in gem quality smaller diamonds.

Mining is currently transitioning from the block cave on the 630mL to the SLC over four levels from 700mL to 780mL. Development of the 11 kimberlite extraction tunnels of 70 level Phase 1 was completed and the tunnels handed over to production for slot cutting and ring blasting during H1 FY 2017.

Petra’s initial mine plan has a life to 2030, but resources in Block 6 and the adjacent Precursor kimberlite orebody, which sits next to the main body of the Finsch kimberlite pipe, are expected to prolong the actual LOM. The mine has gross resources of 36.72 Mcts.

The Finsch kimberlite was discovered in 1960 and the mine was officially opened in 1967. Ore extraction was initially from the open pit. Sinking of the main shaft to access the mine from underground started in 1978. Two vertical shaft complexes, tunnels and ground handling infrastructure were prepared for the continuing exploitation of the pipe with the use of highly mechanised mining methods. In 2008 the treatment plant was upgraded at a cost of approximately US$100 million. On 14 September 2011, Petra purchased Finsch as a fully-staffed, operating mine from De Beers.

Finsch is known for highly commercial goods of +5 carats and is rich in gem quality smaller diamonds. Large, special diamonds are also a feature of the orebody, with a number of +50 carat stones recovered at the mine annually, and the mine also produces very rare fancy yellow diamonds.

1. Resource bottom cut-off: 1.0mm.
2. Reserve bottom cut-off: 1.0mm.
3. Block 4 Resource tonnes and grade are based on block cave depletion modelling and include external waste. A portion of this remnant Resource reports into the current caving operations as low grade dilution.
4. Increased pit scaling and waste ingress have been included in the Reserve models
5. Block 5 and Block 6 Resource stated as in situ.
6. Remaining Block 5 Reserves are based on CA3D software simulations.
7. US$/ct values of 90-100 for ROM, based on expected sales values (with reference to FY 2021 sales results and considering rough diamond prices recovering to levels before the COVID-19 pandemic) and production size frequency distributions.

1. The segment result includes depreciation of US$24.4 million

While the previously reported waste ingress at Finsch has been largely mitigated through the implementation of enhanced drill and blast and draw controls, this requires continuous management.

We saw steady production in the final quarter of the Year leading to an overall increase of 3%, just below guidance.

Finsch revenue increased 34% to US$165.7 million due to a 53% increase in the average price per carat which more than offset a 12% reduction in diamonds sold. As with the Cullinan Mine, this reduction was mainly the result of a higher volume of sales in FY 2021 which was caused by the inventory build-up during the COVID-19 pandemic being released into the market.

Finsch has already reduced on-mine cash unit costs by 8% to ZAR493/t due to the cost curtailment measures undertaken as part of the BRE project and increased production volumes.

FY 2022 capex was US$12.0 million which was mainly spent on underground projects. The expansion to the new 78 Level Phase 2 project has commenced, with ramp-up to full production in progress. In addition, capital has been spent on early mobilisation to de-risk the new Lower Block 5 3-Level sub-level cave project.

As announced previously, the Board approved extension projects at our major South African mines, the Cullinan and Finsch Mines, during the Year.

FY 2023 to FY 2025 production, cost and capex guidance for Finsch remain unchanged and we will continue to implement the BRE project recommendations to support this.

We expect underground development to commence during FY 2023 with production from the new Sub-Level Cave in FY 2025. 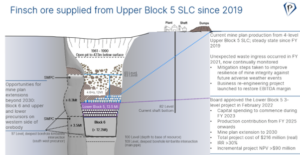 Finsch Diamond Mine (Pty) Ltd (“FDM”) holds a valid new order mining right (the ‘‘Finsch Mining Right’’) dated 15 October 2008. The Finsch Mining Right was initially issued to De Beers under item 7 of Schedule II of the Mineral and Petroleum Resources Development Act, 28 of 2002 (“MPRDA”) and was ceded to FDM by notarial deed of cession on 8 September 2011 and duly notarially executed and registered in the Mineral and Petroleum Titles Registration Office.

The Finsch Mining Right confers on FDM the exclusive right to mine for diamonds in relation to the areas it refers to until 14 October 2038. Pursuant to the MPRDA, the Finsch Mining Right is renewable (for periods of up to 30 years for each renewal) on the basis more fully set out in section 24 of the MPRDA.

Section 2 of the Mineral and Petroleum Resources Royalty Act No. 28 of 2008 (“the Royalty Act”) requires FDM to pay the South African Government a royalty for minerals recovered under the Finsch Mining Right. Pursuant to section 4 of the Royalty Act, the royalty is to be paid on gross sales in accordance with a defined formula set out in the Royalty Act. The formula applicable to rough diamonds is as follows: 0.5% + (earnings before interest and taxes, as defined in Section 5 of the Royalty Act / (gross sales x 9) x 100) but not exceeding 7%.

FDM is also subject to corporate tax in South Africa at the rate of 28% in terms of section 5 and other provisions of the Income Tax Act 58 of 1962.

There are no fiscal stabilisation provisions in place in relation to Finsch Diamond Mine. 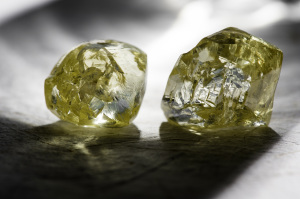