The Cullinan Mine is renowned as a source of large, high-quality gem diamonds, including Type II stones, as well as being the world’s most important source of very rare blue diamonds.

The mine earned its place in history with the discovery of the Cullinan diamond in 1905, the largest rough gem diamond ever found at 3,106 carats, which was cut to form the two most important diamonds in the British Crown Jewels. Many of the world’s most famous diamonds herald from the Cullinan Mine, and it continues to produce world-class diamonds under Petra’s stewardship.

The Cullinan Mine contains a world-class gross resource of 149.82 Mcts as at 30 June 2021, which suggests its mine life could be significantly longer than the current mine plan to 2030.

The Company’s development plan led to underground ROM throughput increasing from 3.7 Mt in FY 2018 to 4.6 Mt in FY 2021, which delivered 1.8 Mcts ROM and 182 Kcts from surface tailings production.

In FY 2020 production from the C-Cut and CC1 East mining areas increased to ca. 3.9 Mt (FY 2019: ca. 3.6 Mt) with the remaining tonnage being supplemented from older B-Block mining areas. The Company will on an ongoing basis investigate the optimal plan to utilise the full extent of the large Cullinan orebody (ca. 16 hectares at current production depths).

The mine was renamed the ‘Cullinan Mine’ as part of its centenary celebrations and to link the mine to the illustrious heritage of the Cullinan diamond, which provided the two main polished diamonds within the British Crown Jewels (the 530 carat Great Star of Africa and the 317 carat Lesser Star of Africa).

Petra initially acquired a 37% interest in the Cullinan Mine from De Beers in 2008, but increased its direct interest in the mine to 74% in late 2009 when it acquired Al Rajhi’s holding in the mine. Petra continues to mine the underground resource using block cave mining methods.

The Cullinan Mine is also renowned as the world’s most important source of blue diamonds, providing the collection of 11 rare blues displayed in 2000 at London’s Millennium Dome alongside the Millennium Star and which included the fancy vivid blue ‘Heart of Eternity’ (27 carats polished).

Since we acquired the mine in 2008, the Cullinan Mine has produced the following important diamonds:

1. Resource bottom cut-off: 1.0mm.
2. Reserve bottom cut-off: 1.0mm.
3. B-Cut Resource tonnes and grade are based on block cave depletion modelling and include external waste. A portion of the Resources in these remnant blocks report into the current caving operations as low grade dilution.
4. C-Cut Resource stated as in-situ.
5. Reserves based on PCBC simulations on C-Cut phase 1 and PCSLC simulations for the CC1E.
6. Factorised grades and carats are derived from a calculated Plant Recovery Factor (“PRF”). These factors account for the efficiency of sieving (bottom cut-off), diamond liberation and recovery in the ore treatment process.
7. The PRF has been revised in line with the new Resource model and plant commissioning in 2018. The PRFs currently applied for the new mill plant per rock type are: Brown kimberlite = 73.8%, Grey kimberlite = 67.9%, Black kimberlite = 70.6% & Coherent kimberlite = 68.0%.
8. US$/ct values of 95-105 for ROM, excluding exceptional stones, and 35-45 for tailings based on expected sales values (with reference to FY 2021 sales results and considering rough diamond prices recovering to levels before the COVID-19 pandemic) and production size frequency distributions.

1 The Company is not able to precisely measure the ROM / tailings grade split because ore from both sources is processed through the same plant; the Company therefore back-calculates the grade with reference to resource grades.

The full range of diamonds was recovered at the Cullinan Mine in FY 2021, including a number of Exceptional Stones which contributed to the highest annual contribution to revenues from the sale of Exceptional Stones. These diamonds included the Letlapa Tala Collection of five blue diamonds of high quality and clarity which were sold as a suite of stones for US$40.36 million, an exceptional 299 carat Type IIa white gem quality diamond recovered in January 2021 and sold for US$12.8 million in March 2021, and an exceptional 11.82 carat blue diamond that was sold for US$9.5 million in Q3 FY 2021.

Post Year end, the Company sold the 39.34 carat exceptional Type IIb blue diamond recovered from the Cullinan Mine in April 2021 for US$40.2 million (US$1.0 million per carat), being the highest price the Company has achieved for a single stone, both in terms of total sales value and per carat. Petra has also recovered and sold two further special diamonds from the Cullinan Mine post Year end, being a 342.92 carat white stone and an 18.30 carat blue stone for a total upfront payment of US$13.5 million, as well as retaining a 50% interest in the profit uplift of the polished proceeds of both diamonds, after costs.

The Company will investigate the optimal plan on an ongoing basis to utilise the full extent of the large Cullinan Mine orebody (ca. 16 ha at current production depths).

FY 2021 Capex of US$16.8 million was mainly spent on the development of the C-Cut Phase 1 block cave, development to North Crusher 2, and an improved support regime to secure long-term accessibility in the North West Corner of C-Cut Phase 1. Based on the reprioritisation of capital spend, the completion of the shaft plant interface project was deferred. The current system has proved to be reliable and will be utilised in the interim with no adverse impact on expected levels of production. FY 2022 Capex for the Cullinan Mine is guided at ca. US$48-54 million, primarily relating to underground development of the CC1E Phase 2 production areas and certain feasibility studies to be conducted related to shaft infrastructure, as well as fines residue deposit facilities and Stay in Business Capex.

The Cullinan Mine contains a ‘Tier 1’ diamond resource of 149.82 Mcts and the Company will on an ongoing basis investigate the optimal plan to utilise the full extent of the large the Cullinan Mine orebody (ca. 16 ha at current production depths).

The Company’s current mine plan has a life to 2030, but the major residual resources at the mine indicate that the actual LOM could extend beyond 2030. 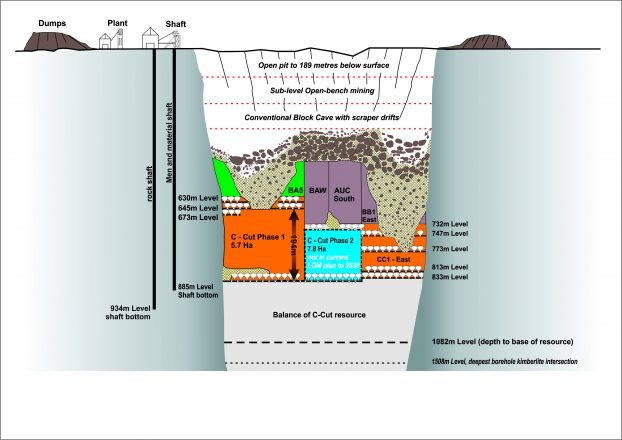 Cullinan Diamond Mine (Pty) Ltd (“CDM”) holds a valid new order mining right (the ‘‘Cullinan Mining Right’’) dated 4 December 2007. The Cullinan Mining Right was initially granted to De Beers pursuant to Item 7 of Schedule II of the MPRDA and was ceded to CDM by a notarial deed of cession on 1 July 2008 pursuant to section 11 of the MPRDA and duly notarially executed and registered in the Mineral and Petroleum Titles Registration Office. .

Section 2 of the Royalty Act requires CDM to pay the South African Government a royalty for minerals recovered under the Cullinan Mining Right. Pursuant to section 4 of the Royalty Act, the royalty is to be paid on gross sales in accordance with a defined formula set out in the Royalty Act. The formula applicable to rough diamonds is as follows: 0.5% + (earnings before interest and taxes, as defined in Section 5 of the Royalty Act / (gross sales x 9) x 100) but not exceeding 7%.

CDM is also subject to corporate tax in South Africa at the rate of 28% in terms of section 5 and other provisions of the Income Tax Act 58 of 1962.

There are no fiscal stabilisation provisions in place in relation to Cullinan Diamond Mine.

In September 2017, Petra completed the construction and commissioning of a modern, fit-for-purpose processing plant at the Cullinan Mine, with a throughput capacity of 6 Mtpa.

This has replaced the previous plant at the Cullinan Mine, which was originally commissioned in 1947 and which had  undergone numerous refurbishments over the years.  Due to its age and operational complexity, it had become expensive to maintain, requiring significant stay-in-business capex, and costly to operate, particularly given the large size of its 26 ha footprint. The plant was also based on old crushing technology, which is known to impact large stone recoveries as while diamond is the hardest substance known to man, it cannot take impact and therefore very large stones can be shattered using conventional processing techniques.  At the same time, the energy efficiency of the old plant was not aligned with the Company’s vision.

The design of the new plant was therefore planned to address these shortcomings and was considered an important factor in setting out a long-term sustainable future for the mine.

The new plant utilises gentler processing methods (comminution via attrition) instead of extensive crushing in the form of autogenous milling and high pressure grinding rolls, which are expected to reduce diamond breakage and improve recoveries across the full spectrum of diamonds, including the larger/exceptional stones for which the mine is rewnowned (the top-cut of 75mm will cater for diamonds of +3,000 carats, such as The Cullinan diamond).

In addition, the new plant has been designed to improve the efficiency of the material flow, thereby significantly lowering operating costs, and has a significantly smaller footprint of just 5 ha, with the associated reduction of engineering infrastructure deployed, including a reduction in:

In efficiency terms, these changes will give effect to improvements of 12% in electricity consumption (as expressed in kWh/t) and a staggering 65% in water consumption (0.17 m3/t to 0.06 m3/t).

This is a good example of how Petra has applied the integrated environmental management principle of ‘Cradle to Grave’ planning for a new project as it has embedded environmental efficiency into the process.

Tours of the Cullinan Mine

To arrange a tour of the famous Cullinan Mine and learn more about its rich history and heritage, use this link.

Diamonds from the cullinan mine 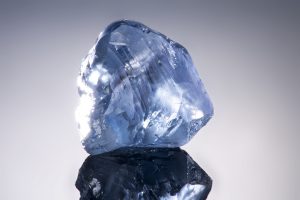 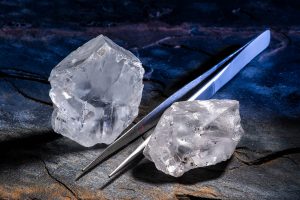