Pure white diamonds are in fact very rare, with yellowish or brown tints being present in the majority of ‘white' diamonds

Pure white diamonds are in fact very rare, with yellowish or brown tints being present in the majority of ‘white diamonds’, albeit so faint in many cases that it is undetectable by the amateur observer.

The hint of yellow that can be noted in many diamonds is caused by the element nitrogen, present within the carbon structure.  Diamonds containing nitrogen are classed as Type I, whereas those containing aggregated nitrogen atoms are classified as Type Ia (the most common category of diamonds. Diamonds without any detectable nitrogen atoms are exceptionally rare and are known as Type II, with a sub-division of Type IIa, being the purest.

The Cullinan Mine is one of the world’s most celebrated diamond mines and is a source of large, high-quality Type II gem diamonds. In September 2009, a 507 carat white diamond, which Petra named the Cullinan Heritage, was discovered here and later sold in 2010 for US$35.3 million, which at the time was the highest price on record for a rough diamond. 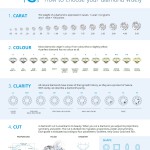