What are your key responsibilities?

My key responsibility is to ensure that our operations are legally compliant in matters that entail rehabilitation, closure and financial provision for closure. I have also developed a Rehabilitation Strategy to steer the operations towards sustainable closure objectives. We compile annual rehabilitation plans as well as a closure plan for each mine and these plans are evaluated on an annual basis.

I particularly enjoy conducting LFAs on rehabilitated areas to determine the benchmark for initial rehabilitation, evaluate older rehabilitation and to evaluate the stability of historical sites. The aim is to scientifically validate the rehabilitation status and to remove the given area from the financial provision for closure.

Petra’s operations make up a significant part of the South African and Tanzanian diamond industry heritage and therefore keeping these historical gems alive within the boundaries of the closure objectives is a key focus for me.

What do you find most challenging about your position?

Some rehabilitation and closure concepts are “foreign” to those who are not used to environmental jargon. I have therefore had to reinvent my way of communicating with different levels and departments within the Company in order to convey the improvement possibilities of concurrent rehabilitation.

The challenge of finding practical, elegant solutions to complex problems keeps me motivated. There is no “one size fits all” solution for the closure strategy for Petra’s operations as the community needs, physical properties of the material and weather conditions will differ in each area. This is something I have to take into account when working on our strategy.

Why do you think there seems to be an increase in interest in mine rehabilitation and closure?

Mining has often been seen in a negative light, due to its impact on resources and ecological functions, however, the current trend to find alternative land-uses in mining impacted areas that will increase the production potential of so called “derelict land” has garnered significant interest.

Through mine rehabilitation, areas are now being transformed into positive, contributing resources and some of the most exciting efforts in this area include finding renewable energy options for “problem areas”.

Biomimicry is another extremely exiting area of development in the rehabilitation arena, where lessons are taken from nature and implemented in technology with minimum impact on the environment. The overall aim is to find synergies with the natural environment in order to boost the social and economic environment.

What do you think will change about mine rehabilitation and closure over the next five years?

The traditional greening of mine impacted land for the sake of “doing it” will totally disappear, we will plan to restore or alter ecosystem functions. Adaptability for climate change will be a necessity, effluent will be viewed as a resource rather than something that needs to be discarded, the assistance of micro-organisms will have an unfathomable contribution and the reduction (and even positive offsetting) of carbon will influence production as well as future investment.

Born in the Southern region of Malawi, Daniel Limbani Phiri matriculated in 2006 at the Chihame II Community Day Secondary School of Nkhata bay. Beginning his career in the mining industry as a fitter assistant, in May 2007 he decided it was time to change and focus on education and training. Daniel obtained the National Diploma in Teaching at Karonga Teachers’ Training College in 2008 and during his studies he also taught at Limba Private Primary School in Malawi.

In 2009, Daniel moved to South Africa and began working for Petra in 2010 at the Helam mine, initially as a support worker. Over the years, Daniel gained experience in various disciplines, from underground production as a trammer and rock drilling operator to a safety representative. Eventually, Daniel became a member of the training department and obtained his Assessors Certificate as a training instructor in a very short time. This achievement enabled Daniel to be an effective trainer, and he was transferred to Kimberley Underground in 2014 to work as a training instructor before being promoted to an assessor. He obtained his OD ETDP Level 4 in October 2016 and was promoted to Safety Training Officer in November 2016.

Daniel joined the LDP in July 2015, in order to provide him with the tools and techniques to be an effective leader and active team member. His communication and interpersonal skills are excellent, and have enabled him to build good relationships with colleagues and leaders, while he is also a highly motivated, reliable and creative individual who understands the importance of teamwork in achieving common goals.

“The LDP gave me an in-depth understanding that my success as a leader is not about my own output, but about others as well. My success in the LDP is hugely dependent on the support, assistance and guidance of my mentor, Mr. Riccardo Popham,” says Daniel.

Lizelle van der Westhuizen was born and raised in a small town around the Vaal Triangle of South Africa. Lizelle initially pursued her love of fashion by obtaining her National Diploma in Pattern and Clothing Construction in 1997. She then further developed her creativity and challenged her business and management skills by opening her own florist in Rustenburg.

However, her career took a different turn after she and her family moved to the Northern Cape, and Lizelle decided to follow her husband into a role in the mining industry at Koffiefontein.

Her road to success started when she was offered a temporary position in the Sort House and with hard work and dedication she was promoted to Sort House Controller. During her time in the role Lizelle attended various Diamond Identification and Evaluation courses and, given her strong performance, the Mine Manager suggested she join the LDP.

The LDP taught her to believe in herself and her team as she learnt to think of herself as a leader. Thinking about the LDP, Lizelle remembers the deadlines and struggles, but also the friends she made along the way and the self-confidence that she built, which are what she treasures most about the experience.

Lizelle’s progression would not have been possible without the help of mentors and her coach, who believed in her and enabled her to leave her comfort zone. Lizelle believes she still has a long way to go, but is already on her way to reaching her goals with what she has achieved.

“The LDP has given me self-confidence, knowledge and skills that will continue to benefit me throughout my professional career,” says Lizelle. 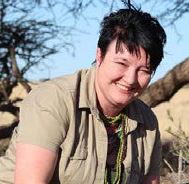