The Company’s partnerships are key in terms of stakeholder sustainability and the long-term success of its operations.

In South Africa, the Company has partner shareholders in its operations who represent the interests of BEE shareholders. These BEE partners include various commercial BEE entities (including women’s groups), as well as, importantly, the Itumeleng Petra Diamonds Employee Trust.

In Tanzania, Petra’s partner is the Government of the United Republic of Tanzania at the Williamson mine, the country’s most important diamond producer. In December 2021, Petra announced that it had reached agreement in principle with the Government of Tanzania on a new Framework Agreement in relation to the Williamson mine. The Company also announced that it had executed a non-binding Memorandum of Understanding to sell 50% (less one share) of the entity that holds Petra’s shareholding in Williamson Diamonds Limited (“WDL”) to Caspian Limited.

Upon completion of the transactions contemplated by the MoU and upon the capital restructuring in the aforementioned Framework Agreement becoming effective, Petra and Caspian will each indirectly hold a 31.5% stake in WDL but with Petra retaining a controlling interest in WDL.

Summary of Mine Ownership 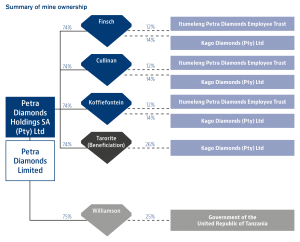 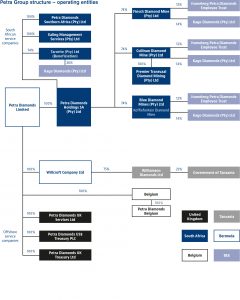